He was the Dean of the Faculty of Economics and Finance at the Tshwane University of Technology from 2004 to 2007 and before that the Dean of the Faculty of Economic and Management Sciences at the Technikon North-West (South Africa) from 2001 to 2003.  Prior to that, he taught economics at the University of the Witwatersrand (South Africa) for seventeen years.

He is the author of The Evolution of the South African System of Innovation since 1916 (Newcastle upon Tyne: Cambridge Scholars Publishing, 2009).  He is the editor of The Emergence of Systems of Innovation in South(ern) Africa: Long Histories and Contemporary Debates (Johannesburg: MISTRA and Real African Publishers, 2016).   He is also the co-editor of three books on the national systems of innovation in the BRICS (New Delhi: Routledge, 2013)and was the co-editor of the book Measuring Innovation in OECD and non-OECD Countries (Cape Town: HSRC Press, 2006). .  He has published articles in the STI Policy Review, the International Journal of Technological Learning, Innovation and Development, the South African Journal of Economics, the South African Journal of International Affairs and the African Development Review. He is the author of chapters in the following books: The Political Economy of Indian Ocean Maritime Africa (New Delhi: Pentagon Press, 2015), The Africana World: From Fragmentation to Unity and Renaissance (South Africa: Africa Institute of South Africa), Local Economies and Global Competitiveness (UK: Palgrave Macmillan, 2010), Universities in Transition - the Changing Role and Challenges for Academic Institutions (New York: IDRC Publishing & Springer, 2011), The Indian Ocean Rim: Southern Africa and Regional Co-operation., (New York: Routledge-Curzon, 2003) and Putting Africa First: The Making of African Innovation Systems. (Denmark: Aalborg University Press, 2003.

This paper looks at the conditions which will determine the engagement of the four IORA member countries in sub-Saharan Africa - Kenya, Tanzania, Mozambique and South Africa – with the other economies in the association. These four countries are not viewed in isolation from other African economies, given the increasing importance of the regional economic agreements which link them to the rest... 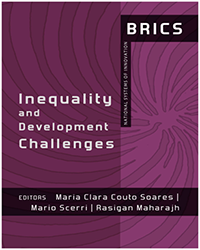 This volume analyses the co-evolution of inequality and NSI across the BRICS economies. It reveals the multi-dimensional character of inequality, in going beyond its income aspect to include assets, access to basic services, infrastructure, knowledge, race, gender,... 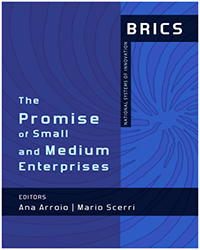 This volume looks at the relationship between small and medium enterprises and national systems of innovation across the BRICS countries. It brings to fore crucial issues in the evolution and future trends of industrial or innovation policies for small... 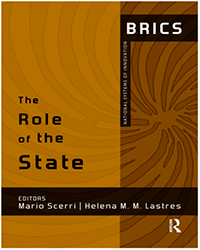 This five volume set examines various aspects of the BRICS economies from a national system of innovation perspective. Original and detailed data together with expert analyses by contributing authors on wide-ranging issues make this an invaluable resource for researchers and scholars in economics,...

The re-drawing of the provincial map in South Africa after the collapse of apartheid had to address the spatial economics that had emerged within the peculiar frame of reference of apartheid. The main parameters of this planning context had been the creation of homelands, or bantustans, as independent political economies and the containment of black labour within townships close to, but...

In this book, Mario Scerri provides the reader with a novel and sweeping rendition of South Africa's economic history from the early part of the twentieth century to the present. He applies a broad innovation systems approach to this history spanning the period from 1916, which saw the drafting of South Africa's first Science and Technology plan to the first fourteen years of the post-...

The formulation of the concept of a national innovation system (NIS) emerged from an evolutionary account of the economics of technological change that had arisen in opposition to the established neoclassical orthodoxy. The principal defining feature of the new paradigm was its emphasis on specificities as opposed to the universality assumed the the neoclassical account of technological change...

This book emerged from the seminar on the Measurement of Innovation Activities in Organisation for Economic Co-operation and Development (OECD)and non-OECD countries held in South Africa in 2001. The motivation for that forum was the recognised need to address a new exciting phenomenon in the area of economic policy formulation.

It is widely accepted that innovation is key to economic growth. Countries where research and innovation are high on the national agenda are best suited to prosper in the knowledge-based economy. Conversely, countries whose economies are mainly dependent on natural resources and basic industries tend to lack competitiveness and flexibility in adapting to changing global trends. The...

The Brazil, Russia, India China and South Africa (BRICS) group has emerged as a collection of large economies which are outside the traditional groups of industrialised “first world” economies and which have altered the global distribution of economic power. The basis of their emergence is a combination of their size and growth rates, and the fact that they lie outside the established centres...

In this paper I examine the possible modes of introducing a Systems of Innovation (SI) approach into economics curricula. I look at the various possible choices of coupling this approach with standard economic curricula and then explore the implications of these various choices. I link this argument with current heterodox debates on the relevance of the neoclassical text and the...

This paper explores possible reasons for the long and enduring dominance of neoclassical theory over the undergraduate microeconomics textbook. It proposes that those very attributes of neoclassical microeconomics that raise serious theoretical misgivings constitute the basis for the current hegemony of the standard undergraduate textbook. It further discusses the effects of the standard text...

Innovation: Orthodoxies and Evolution (Transcript of speech delivered at the Fifth Anniversary of IERI)
2010
Mario Scerri

There were a number of options in the naming of this institute whose anniversary wen have gathered here today to celebrate. This was due to the nature of our object of analysis, innovation, where a number of disciplines intersect and where, therefore, a strong degree of multi-disciplinarity is called for.